The Australian Rugby League Commission has reached a deal with the Nine Network that is slightly better than the pre-covid one and now all media deals run through to 2027. This puts RL in Australia on a sound financial footing. Considering local RL is a sport with pro teams only on the Australian East Coast and New Zealand, it's not a bad deal. How much more the lesser populated western side of Australia would add to any deal is uncertain.

So that's the good part. What about the other part that makes this a mixed blessing. Well, it seems international RL isn't going to be enlarged, in fact mid season teat matches in the southern hemisphere look to be canned. The Pacific Island nations love tests and NZ is quite keen but they have little support in Australia.

One of the ways RL maximises its return is having long seasons to satisfy an insatiable media. The game is tough on the body and the only way to get a reasonable off season for top players is to forgo international tests.

The bottom line is with the domestic game in Australia financially sorted and international RL not having anywhere the same earning opportunity, it is spurned. The fact it offers variety and another way to promote the game is lost on those who study balance sheets.

Up north: England has ignored international RL in its area because there was more money playing the top southern nations. Now they have shown domestic RL is their only interest, it leaves England without stern international opposition. So the northern side of the game needs to forget naval gazing Australia and develop a meaningful international calendar in its own region.

If England wants test matches, it needs to foster them in its own backyard. Initially, there may be some blow out scores but in due course, the competition will improve. It won't be much of a money spinner, at least not initially but it will lift the credibility of the code and will do much for the game as a whole.

In a world ruled by the dollar, it would be nice if the northern hemisphere created a strong annual international scene regardless of financial returns. That could be a positive that this mixed blessing brings.

Having discussed the men's side of the rankings (see here), we move on to areas that are much newer to the rankings. The women's list goes back to 2017 and the wheelchair list is new for 2021.

Women's: Ironically Australia seems to take this side of international RL more seriously than the men's. They and New Zealand are a step up on the rest although England is working hard to close the gap. The + and - signs in the 2021 section are changes in ranking compared to 2019. I'm pretty sure a 2020 list was never made. Colour coding is used to show regions. 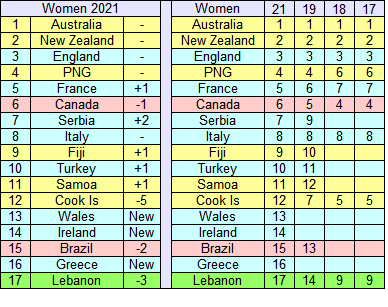 Wheelchair: If you haven't seen this version of the game, the skill and courage is amazing. It's also a mixed sport for men and women to compete together. France is at the top of the ranking here and they certainly are taking this form of the sport seriously. it is a Europe based sport with only Australia from outside of that region listed. Surely the list will lengthen over the next few years. 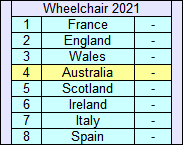 In this brief video, here's a try scored in an international match between England and France.
at December 12, 2021 No comments:

Every year I look at the world rankings for RL. It is based on how many internationals are played, the ranking of the opponent and how recently they were played. Like any ranking system, it doesn't always reflect the present standard perfectly. If a country plays few internationals, then it will hurt its ranking and place it lower than it deserves. Even in Soccer, where internationals are given much significance, there is no shortage of anomalies in how nations are rated.

So with that understanding, are they worth much?  I still feel they give a general picture and hopefully an incentive to take international matches seriously, not an attitude the sport of RL is imbued with. So surely Australia is top, considering its depth of talent. Err, no. Like I said you have to take international RL seriously to get a good ranking. Below there are two sides to the chart, one 2021 and the other a historical list going back to 2013.

It's colour coded by region. Yellow is Pacific and is the strongest region. Blue is Europe, salmon the Americas, green Africa/Middle East and orange Asia. The + and - signs in the 2021 column are based on a comparison with the 2019 ranking. I don't have a 2020 list and I don't think one was ever collated.

The women's and wheelchair rankings can be seen by clicking here. 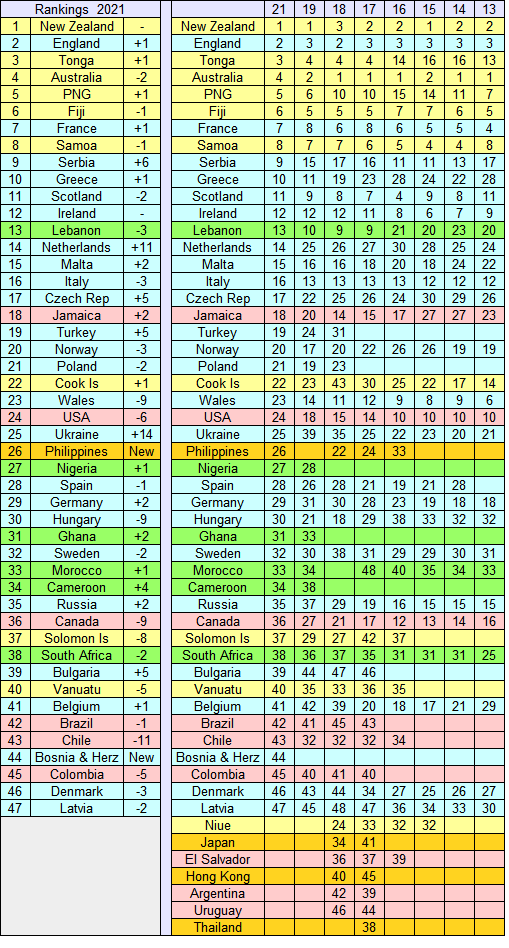 Email ThisBlogThis!Share to TwitterShare to FacebookShare to Pinterest
Labels: International

This is the final in a series that charts the clubs that have played elite Rugby league in France in five year increments. We continue with the late 2010s. The chart has points I have allocated according to where teams finished in the League, Finals and Cup competitions. Any feedback is appreciated in the comments section below.

2014-15: This was an even season with Carcassone winning the league,  Toulouse the grand final and Lézignan the cup. St Estève-Catalan had a good season without reward.

2015-16: Toulouse joined the UK League One so the domestic team was retained but without the same firepower. Albi returned and has stayed since. Carcassone win the league, Limoux the grand final and St Estève-Catalan won a trophy with a cup final victory after a few years of missing out.

2016-17: St Gaudens returned after a brief absence, Lézignan finished top of the league, Limoux the grand final and Carcassonne the cup. Lézignan's overall consistency made them the best for the season.

2017-18: St Estève-Catalan were getting back to their winning ways with league and cup wins. Avignon won the grand final while Limoux did everything but win a trophy.

2018-19: Carcassonne was the best with league and cup victories with St Estève-Catalan winning the grand final.

Summary: St Estève-Catalan's consistency narrowly had them the best of the five year stanza, with Limoux, Lézignan and Carcassone unable to be separated and all so close to the top. Those four clubs were the strongest.

Point of interest: Avignon is famous for hosting popes way back in the 1300s and I recall singing a song at school about a bridge in the city. Its fame here is its Rugby league club, liquidated in 2001 but survived to remain down to this day. It's in a sizable city so would it be suitable to enter a team in the UK one day? Perhaps a bridge too far.

Email ThisBlogThis!Share to TwitterShare to FacebookShare to Pinterest
Labels: France

This is part of a series that charts the clubs that have played elite Rugby league in France in five year increments. We continue with the early 2010s. The chart has points I have allocated according to where teams finished in the League, Finals and Cup competitions. Any feedback is appreciated in the comments section below.

2009-10: Lézignan showed potential in the early 2000s but came alive here, taking all, the trophies on offer. Limoux, Carcassonne and Limoux were competitive but none were a match for the treble winners.

2010-11: To show that the previous season was no fluke, Lézignan did it again! Pia and Limoux were closest to them. St Gaudens left the top flight after many years of being part of the setup.

2011-12: Things changed with Pia winning the league and Carcassonne prevailing in the grand final and cup. Lézignan tried hard but was unable to get close to the two previous seasons. Toulouse was back in the big time again after three years away.

2012-13: Pia was the best team with league and grand final titles and Avignon taking the cup home. RC Lescure-Arthes XIII brief flirtation with Elite One status ended this year.

2013-14: Pia was gone, Limoux won the league and Toulouse took the grand final and cup trophies. The Palau Broncos arrived in the top flight and have stayed ever since despite being based in a tiny village near the Spanish border.

Summary: Lézignan did well over this period with Carcassone, Pia and Limoux not far behind. St Estève-Catalan were very consistent but didn't win anything. Toulouse came back and was soon making its presence felt.

Point of interest: The Pia Donkeys decided to pull out of the Elite One competition, demoting themselves due to new financial circumstances. It's a shame that such had to happen but the way the clubs are structured in France, their ownership system can cause this sort of thing to happen.

For the following article in the series, please click the dates 2015-19.

Email ThisBlogThis!Share to TwitterShare to FacebookShare to Pinterest
Labels: France

This is part of a series that charts the clubs that have played elite Rugby league in France in five year increments. We continue with the late 2000s. The chart has points I have allocated according to where teams finished in the League, Finals and Cup competitions. Any feedback is appreciated in the comments section below.

2004-05: St Estève-Catalan won everything this season in an impressive display. It was their last year in full strength as they were admitted into the UK Super League in the 2006 season. Toulouse, who had also sought a place missed out but performed well in the French season.

2005-06: With St Estève-Catalan spreading its resources wider, Pia took its chance to excel with a clean sweep of the titles. Toulouse was the only club that got close.

2006-07: Pia's rampant 05-06 was repeated this season with another treble. Lézignan stayed close, a sign of things to come.

2007-08: The sign turned to reality when Lézignan won both league and grand final. Limoux took the cup for a refreshing change at the top.

2008-09: Limoux edged Lézignan in 08-09 with the league plus grand final and cup final appearances. Lézignan secured the grand final for a second season with Carcassonne the cup winners.

Summary: SM Pia XIII was the strongest side around for the five years here evaluated. Limoux and Lézignan were both no doubt pleased with their efforts. With St Estève-Catalan not the force they were on the local scene, it allowed other sides to make their mark.

Point of interest: Toulouse fell out of the top flight in the 2009-10 season after some years of fine performances. Would they be back? Of course, as the series will reveal.

For the following article in the series, please click the dates 2010-14.